The Northcote High Ex-students’ Association has around 500 members and warmly welcomes all ex-students and staff to join.

Membership entitles you to access information about Northcote High School, a copy of our annual Ripples magazine, and invitations to the reunion day and other school events.

Our past students have excelled in a wide range of fields, including science, the arts, politics, sport and research. See History to learn more about some of our past students’ achievements.

To join the association or to add new information to the register, contact Kate Challis on 9488 2300 or email Kate Challis.

Congratulations go to Neville Howell (Class of 1947) awarded an OAM in the recent Queen’s Birthday Honours. Neville was an Olympic rower, winning a Bronze Medal at the Melbourne Olympics of 1956 and a Commonwealth Games Gold Medal in rowing 8s in 1962. He rowed in six winning crews in the King’s Cup competitions. He operates a horse stud at Nagambie, Victoria. Well done Neville!

Ex-student and noted sculpture Ross Miller (Class of 1958) is fighting illness at present. We are thinking of him and send best wishes. When in Year 12, the painting below was part of his Year 12 Art portfolio. It is of the Albion Charles Hotel near the School. The Association congratulates Ross on his career and great talent.

With great sadness we record the passing of Trevor Rowe, MBE (Class of 1940). Trevor was in his 96th year and passed away on July 8th, 2020. He started at NHS in 1936 and was one of our few surviving ex-students of that era. He maintained a close interest in his old School, regularly attending “Back to” days and only recently joining the Association’s Interim Committee representing our earliest students. He was a Commonwealth Public Servant having started in the Navy Department in 1941 and rising to be Senior Private Secretary to Ministers Sir James Killen (Defence) 1975-81 and Senator Gordon Scholes to 1982. He was active in many organisations right up to the end. Member of the School Athletics Team, Prefect and Plenty House member, he will be greatly missed. Our thoughts are with his wife, Barbara and the family.

The Association is also saddened to learn of the passing of Frank Phillips OAM (Class of 1948-9). Frank was an active member of the Ex-students’ Association and regular attendee at his November class reunion. He always arrived wearing his uniform which still fitted him. He was a Fellow of the Australian Institute of Company Directors and worked in Human Resource Management. He was a Commissioner of the City of Kingston and held very senior management roles with ESSO, REPCO, Chamber of Manufactures, and in the chemical industry. He was Founding President and Life Member of Friends of the Royal Botanical Gardens, Melbourne Rotary Club member and one-time member of the Colts Victorian Hockey Team (1950-2). At School he was a member of the senior Hockey Team, a Cadet Lieutenant, Cadet Corps and proud member of Darebin House. We extend sincere condolences to wife Elizabeth and the family. He will be missed. 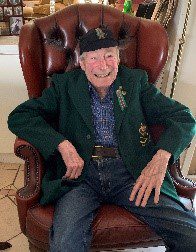 Maurice Dragonetti (Class of 1978) passed away late in June. Having studied purchasing management at RMIT he pursued a career in this area becoming Manager for General Mills. He was a keen golfer, tennis player and Collingwood supporter. At School he played tennis. He attended the Class of ’78 reunion a year or two ago and will be missed by classmates. Our deepest sympathy goes to his wife and family. Meliora Sequamur

Passing of Professor Bruce Dawe AO (Class of 1946) The Ex-students’ Association is saddened by Bruce’s recent passing. Bruce left school and experienced several jobs before joining the RAAF. His brilliance as an Australian literary figure emerged after WWII and his poetry was greatly appreciated throughout Australia, being studied by generations of senior students. He added academic qualifications including Masters’ degrees and several doctorates. He became Professor of English at the University of Southern Queensland. He was awarded numerous distinguished prizes for his poetry which reflected on Australian life and activities. Ripples stated about him as a student in 1945 that he was a “budding Australian author.” Bruce visited NHS several times and always said that the great inspiration for his writing was his English teacher, George Stirling. Bruce dedicated a poem to the school and to George Stirling at the school’s 60th Jubilee. He was truly an alumnus of whom the school can be justifiably proud.

Credit: Thank you to Gary Israel, former Principal of NHS.

This photograph appeared in the The Age 12th April 2020 showing Bruce addressing the senior students in 1986.

All face to face functions are postponed due to coronavirus.

Passing of Bill Mudford (Class 1947). It was with much sadness that the Association received the news of Bill’s demise. He passed away in February of this year. Bill was originally self employed in the printing industry and, later, managed Dallas Brooks Hall. He had a great interest and involvement in farming and Landcare. When at school, he played in the School Orchestra, Hockey Team and served the Library Committee. He was a great supporter of the School and Ex-students’ Association and had recently joined the Association’s Interim Management Committee. Until 2004 he annually attended School Assemblies to distribute scholarships to worthy students on behalf of the Association. He attended the annual luncheons of his year group up to 2019. Vale Bill!

Interim Management Committee. The group met with Principal Sue Harrap and key staff in February to consider future directions. It was noted that we need much better systems of communication via electronic and social media processes. The Principal is to meet with Ex-student Omar Hammoud to further consider options. A real estate board outside the School will seek further members and it was decided to continue with the annual luncheon at the St Georges Restaurant at Melbourne Polytechnic. It was good to see Trevor Rowe and Bill Newell at the meeting. The Interim Committee sends all good wishes for health and safety to all ex-students, their families and the present School community.

Reunion lunch of the Class of 1955 was held at the Peacock Hotel on February 11th. The School was represented by Acting Principal Ciar Foster and Kate Challis of the School Administration. The group noted that it was 65 years since they had Matriculated so it was a special occasion. Memories were shared and “catch up” information exchanged. Thanks go to Ken Cunningham for organising the event. The group sent best wishes to Allan Wilcox and his wife Mavis who were unable to attend.

Passing of the Hon. John Cain.

The Northcote High School community is deeply saddened by the passing in December 2019 of John, former NHS student and Premier of Victoria (1982-1990). We extend sincere sympathy to Mrs. Nancye Cain and family. His father, as Member for Northcote, played a pivotal role in obtaining a high school for Northcote which John Junior attended for four years to 1946. He excelled in debating and served on the Ripples Committee. In these times NHS only taught Mathematics and Science at the senior level. John was forced to leave to pursue humanities. He later obtained a Law degree from Melbourne University. He has maintained a keen interest in the School down the years supporting the establishment of an Arts Centre, the writing of the school history and the building of the John Cain Library. He will be remembered with affection by the Class of ’48 Luncheon group, his classmates. The School has lost a great friend. He certainly lived up to our motto, Meliora Sequamur (Follow the Better things).

The Association Interim Committee will meet with the Principal at the School on February 21st at 10.30 am to discuss the further development of the Ex-students’ Association.

Best wishes are extended to members Bruce Campbell, Head Prefect of 1948 and Bill Mudford, Class of 1948. Both men are facing challenging health issues at present and we hope they will be a little cheered by this message from the old School.

Sad news continues with the recent Passing of James Mollison, AO (Class of 1946). James began his working life as a secondary Art teacher. He moved into the area of gallery work and rose to be Deputy Director of the National Gallery of Victoria and, later, Director of the Australian National Gallery, Canberra from 1977 -1989. He was Art advisor to the Office of the Prime Minister 1969-71. He was a member of Merri House and avid user of the School library. Sincere condolences are extended to his partner and the family. Vale James.

A History of Northcote High School

Purchase your copy of The Green, the Purple and the Gold: a history of Northcote High School by Gary Israel, Itiel Bereson, Robert Bridges and Hector Gallagher.

Call our office to place your order.

Help us fund programs and new school spaces and resources.